Dragon Ball Z: Battle of Gods (ドラゴンボールZ 神と神, Doragon Bōru Zetto: Kami to Kami; lit. "Dragon Ball Z: God and God") is the 14th Dragon Ball Z movie. It will premiere in Japanese theaters on March 30, 2013.[1] It is the first Dragon Ball movie in 17 years to have a theatrical release, the last being the tenth anniversary movie Dragon Ball: The Path to Power in 1996, which followed the first three Dragon Ball films and the thirteen Dragon Ball Z films.

The events of Battle of Gods takes place several years after the titanic battle with Majin Buu, which determined the fate of the entire universe. Bills, the God of Destruction who is tasked with maintaining some sort of balance in the universe, awakens from a long slumber. Hearing rumors that a Saiyan defeated Frieza, Bills tracks down this warrior: Goku. Ecstatic over the new challenge, Goku ignores King Kai's advice and battles Bills, but he is overwhelmed and defeated. Bills leaves, but his eerie remark of "Is there nobody on Earth more worthy to destroy…?" lingers on. Goku and his allies must aim to stop the God of Destruction before all is lost.[2] A mysterious character named Wiss also appears in the film.

The film was first announced on July 2012, in the 33rd issue of Weekly Shōnen Jump. Early in July, the official website for the magazine had already opened a "D" teaser page with a countdown to a "surprise" on Saturday, July 14, release date of the 33rd issue. On July 14, the countdown site and official websites were changed to show Shenron appearing and then disappearing, revealing some minor information of the upcoming film; this includes the premiere date, staff information, and companies involved in the production (Fox International Productions Japan, Shueisha, Fuji TV, Toei Animation, Bandai, Bandai Namco Games, and Bird Studio). Goku, Gohan, Piccolo, Krillin, Goten, Trunks, Vegeta, and Shenron appear on the first promotional arts shown and the tagline revealed is The best, begins (最強、始動, Saikyō, Shidō), followed by "The world has eagerly-awaited. It's the most exciting like never before..." (全人類待望。かつてない興奮へー, Zen jinrui taibō. Katsute nai kōfune).[1]

The official website also announced a comment by Akira Toriyama about the movie printed in Weekly Shōnen Jump #33: the Dragon Ball series creator notes that the adaptation will mark the first time he has been so deeply involved in the production of an anime, in this case as early as the screenwriting stages. Toriyama also says that the film will retain the atmosphere of the original while adding small amounts of "modern flavor."[1] Toei Animation released a press statement on July 17, 2012:

In July 21, 2012, a short teaser trailer announcing the film was shown at the Saikyō V-Jump Festa: the camera drives through a rocky area towards Goku, who is standing on a rocky mountain. At the end, a close on Goku's face shows him smiling. Both Toriyama's comment and the teaser trailer were added to the official website in August 2012.

The funding of this movie costs ¥50 million ($636,000 USD) received by Toei from the Agency for Cultural Affairs (Bunka-cho) as part of the non-profit organization UNIJAPAN’s “Co-production Certification Program”. Of the four films awarded funding support, this movie was the only animated film to receive such an honor due to its “enduring international popularity” and its production collaboration with Fox.[4]

During the 30th Prize Fair, which took place in Tokyo on November 7, 2012, Bandai showcased some of their new Dragon Ball figures for winter 2012, as well their World Collectable Figure line produced in conjunction with the 2013 movie. This latter is a set of eight figures around 7 cm tall that covers characters that make an appearance in the 2013 movie. Along with Vegeta and Super Saiyan 3 Goku, the three members of the Pilaf Gang were among the figures revealed. With the movie title revealed on November 2012, a special pre-sale Collaboration Ticket with the One Piece Z movie was made to commemorate the release of the two films. The dual-ticket good for both films has a special new illustration by both Eiichirō Oda (author of One Piece) and Akira Toriyama. Limited to 8,989 across Japan, the tickets went on sale on November 23rd, 2012, for ¥2,600 ($31.51 USD) apiece. 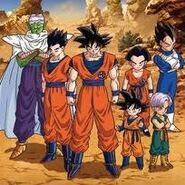